US Girls wrestling - some interesting statistics....

It has ocurred to me that we don't do enough on this blog to champion the efforts of our sisters in the United States, who in many ways are at the forefront of the battle of the sexes. US High school wresting is one of the only sports where girls are officially allowed to compete directly against boys and despite a huge disparity in participating numbers and ongoing discrimination, the teenage girls of America are taking the wrestling scene by storm.

One of our contributors is an ace researcher and she has done some great work collating evidence from official records and the results are pretty spectacular. She recently posted them in a reply to a comment, but I feel these are so important that they really deserve their own post - so please see again below... Let's hear it for our sisters Stateside!!! Enjoy and please let us know your thoughts... 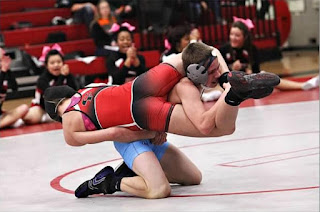 If we look at the results of coed wrestling matches and analyse the statistics, when the results or normalized to scale the disparity in population size we see that girls, 2% of the wrestling population, even with all the gender discrimination they suffer, statistically win 60 matches out of every 100, a clear majority of 60% of the bouts. Going deeper, we see that as match ups being decided by weight divisions and due to the puberty gap where girls go through their growth spurts earlier than boys, quite often the genders compete on a playing field with a significant age gap. Basically there are a significant amount of middle school girls 13 years old or younger in their first or second year of wrestling taking on senior guys, 16, 17, 18 years old…basically young men who have been wrestling for 5 or 6 years. You would expect a senior male wrestler to be able to overpower a girl this age but that's not what happens. The girls win convincingly even against the top talent level, the statistics still hardly change, and the girls crush them! They win most of those matches 59 to 100 59% age gap practically makes no difference!

Now here’s where the statistics look even worse for the guys. It was always a fear that in mixed gender bouts the female ran a great risk of being badly injured, however results show that is males who are at greater risk. In a study of 203 mixed gender bouts, 7 ended in reports of injury medical attention for the losing wrestler (including dislocated shoulders and cracked ribs). None of this 7 was female, all the injured were guys. Of the 7 injuries 2 were when senior boys ended up getting wrecked at the hands of junior female wrestlers! To summarise what these stats mean, given equal participation when you take a team of 10 trained female wrestlers against equally trained men you can bet money on at least a 7-3 female victory some of the men will in all certainty be carried off the mat on a stretcher. Train a team of 10 13 year old girl wrestlers and match them against equally trained adult males 6 of the men will loose and again stretchers will be needed. To really hammer the point of female supremacy take a moment to imagine the carnage our squad of 13 year old sisters would inflict upon a group of men who can’t wrestle! Female power unleashed! Put an untrained man against a girl wrestler and he would get hurt bad! Considering how little attention and training and discrimination girl wrestlers get compared to boys the stats show man’s oldest sport is beginning to belong solely in the realms of the female! And now matches where girls as young as 12 demolish senior year boys, 17/18 year olds - men in fact, in less than 30 seconds are becoming more and more frequent and normal. Maybe society should not wonder whether women can compete with men, but question whether due to male inadequacy and frailty if it's unfair to let men even try to 'compete' with the girls.Bottom line, girls rule :D

Link to illustration of full fight - Cassy vs Kyle

Click the word "Comments" below to add your thoughts...